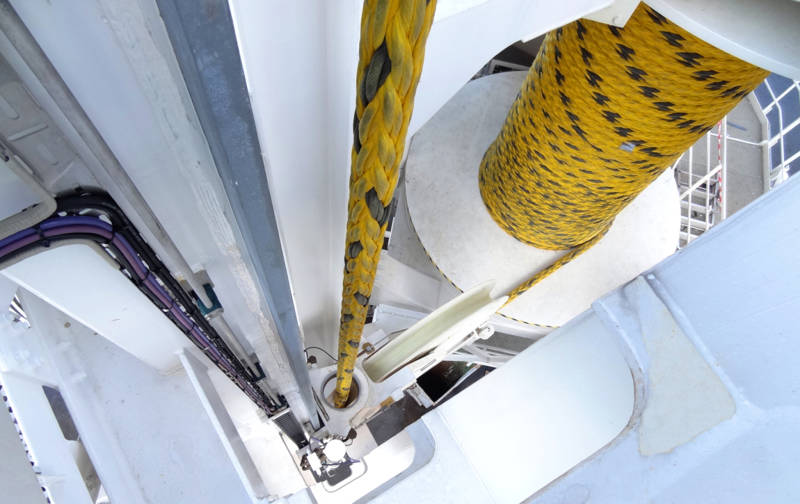 An understanding of the effects of abrasion on bending endurance is critical to the service life of ropes used for deepwater deployment. Sales Director, Sergio Leite, reviews the importance of rope construction, yarn selection and coatings in maximising CBOS rope service life.

HMPE (high modulus polyethylene) is the preferred material for CBOS rope systems. One of the strongest fibres available, HMPE simultaneously has a very low specific weight and, following developments by Dyneema®, virtually no creep.

A twelve-strand circular braid rope construction was used to provide the high yarn to rope efficiency conversion needed for deepwater deployment ropes. Each of the rope strands is a 3-strand laid sub-rope. Initially created by Dyneema® and further developed by Lankhorst, this rope construction allows the production of endless rope lengths by strand splicing. Using three strand laid sub-ropes as strands of the final braided rope also reduces the number of cross-over points, helping to reduce internal abrasion and temperature build-up.

In total 20,000 cycles of testing were conducted over 4 days. Far more that would be seen in practice. A typical CBOS system would experience 20,000 cycles over a 12 month period.

Figures 1 & 2: After 20,000 cycles, no abrasion was observed in the no bending zone and the rope was in pristine condition. In the single bend zone (SBZ) there was some fuzziness mainly caused by the gluing effect of the coating, and the filament breakage caused by opening the rope structure to inspect it. In the double bend zone (DBZ) there was no evidence of any rope yarn breakage. The opening of the rope structure was especially difficult in the DBZ, due to the high compactness of the rope in that area. Minor filament breakage was visible, by opening the rope, and a small accumulation of coating was visible in the centre of the rope.

During the CBOS tests, the rope performance under Active Heave Compensation operation mode has been simulated. The tests represent an accelerated to failure test, as it is always the same rope section that is “worked”. However, even under these extreme conditions, test results have shown that internal abrasion can be significantly reduced by the choice of rope construction and yarn coating, leading to longer service life.